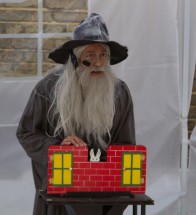 Please look at the pictures to learn a little more about the magic show, and mysterious laser velvet cosmic night sky. Set in a moonlite castle with Gadaldore, the elves,the fairies and the pixies. Children's enchanting magic parties. Children's magician London. The wizard Gandaldore 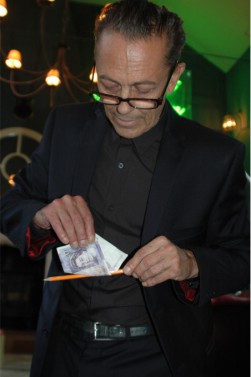 Burning the pencil through the bank note

The show is a medley of Amazing magic illusions, levitation, close-up sleight of hand, and lots of surprises. If you decide to hire Gandaldore the Wizard or Kevin smart suit magic. You are assured of gobsmacking entertainment.

Take a white silk from my jacket pocket.

Silk is vanished in the hand, show empty hands, white silk reappears back inside  the hand. White silk then changes colour several times while going though my hand.

The final colour is then vanished in the hand. Completely gone. Empty hands.

A fantastic news paper rip and tear illusion/fast as a flash instant restoration.

The best in the world? Impossible!!!!

Followed by a pencil ripping a hole in a banknote and through, only to be found, undamaged??? I explain it's not ripped, because we burnt the pencil through and show how.. Return undamaged note.

Extremely visual knock you back what happened WOW magic.

The mysterious "Cosmic universal Black Hole" 3 solid bouncy balls vanished? or invisible? But they're they are there somewhere????? Inside the Abyss? That is the black hole. Fantastic magic.

(If in program requirements)

Signed card appears from the magicians pocket and the other card is found in the middle of the shuffled deck by the signed card. magic.. Amazing...

The ambitious card and more.. Five tricks in one routine.

All around the world.

11 cards manipulation vanishing/reappearing and transposing from hand to hand.

Gandaldore gets thirsty and pours his favourite Red Bull into a glass only to let go of the glass in mid air, (suspended while pouring…Red Bull. It gives you wings) I insist on giving the pixies and the fairies a drink to celebrate the child's birthday, so pour the Fanta in one cup, jiggle them, then pour into another cup, only to find after another jiggle the fairies have had their drink, and the beakers are completely empty..

Kevin. Magicians refreshment trick - followed by keep your eye on the Red Bull.

The Silk story. Three silk hand vanishings to pocket. Then the silk strangely turns into a long cane.

After refreshment I impossibly burn a borrowed 10p into a clear empty wine bottle then bring back out through the glass. In your face. No bottle breaking.

Two special tickets handed out. “Look after them.. there will be a prize at the end?”

One loosing Lottery ticket folded 4 times in 4 times out changes to a £50 note.

For the older children or adults, a great ink transposition from their signed/initialled 10p on to a 2p from their own hands. Simply amazing magic in their face.

Followed by a fun run rabbit run for the younger ones.

The older children like this too, but very uncool to admit it.

A magic wand to levitates a piece of tin foil, (Gandaldore) followed by Gandaldore or Kevin complete body rising by levitation from a magic box. (8 inches in the air)

Magic not necessarily in this order. Magic is very entertaining for all ages/adults.

This is a typical magic trick example. Any question? Or to confirm you’re booking. 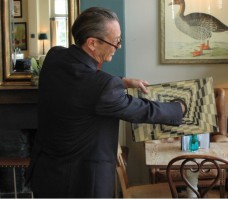 Delightful vanishing close up slight of hand magic. Illusions that will leave your guests mystified. Please look in Showtime and Film. 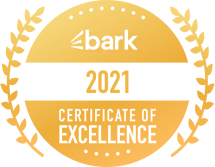